An Ecotourism Guide To Puerto Escondido and Huatulco

The coast of Oaxaca is the best place to get away from tourists crowds and be closer to nature.

A few hours from the highlands of Oaxaca's Central Valley is the spectacular Oaxacan coast along the Pacific Ocean.

The recently developed resort area of Hualtulco is Mexican ecotourism at its best, with some of the most beautiful beaches and jungles preserved in Huatulco National Park.

Unlike much more well-known Cancun on the eastern Yucatan coast, there is little "big box" tourism in Huatulco and the rest of the Oaxacan Coast.

Instead, this off-the-beaten track spot attracts nature lovers, birdwatchers and surfs who flock to the legendary waves around the town of Puerto Escondido.

The state of Oaxaca is considered number one in Mexico in terms of biodiversity. It is the only place where you can travel less than 90 minutes from snorkelling on a coral reef to wandering in a lush cloud forest.

The area is also renowned for having the world's largest turtles. While human beings are one of the youngest species, turtles are one of the most ancient and they are highly revered in the local Zapoteca culture. 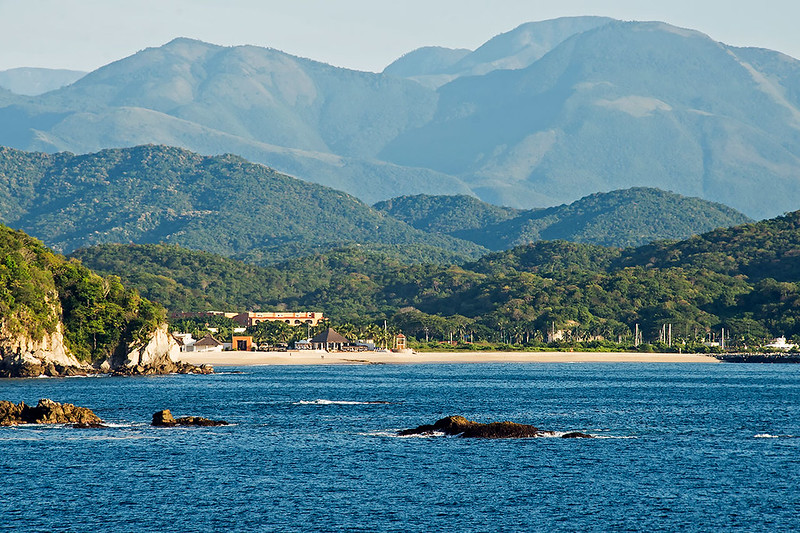 Huatulco is an ecotourism hotspot with its 9 spectacular bays, 36 sandy beaches, 22 miles of coastline and 330 days of sunshine making it a near-perfect, all-year destination for enjoying the outdoors in a relatively unspoiled setting.

The nine scenic bays offer opportunities for swimming, boating, scuba diving, snorkeling, surfing, sailing and other water sports in protected areas off of the Pacific Ocean.

A national treasure, Huatulco National Park covers 29,000 acres and protects 9,000 species of plants, 700 species of birds, 470 species of reptiles and more than 260 species of fauna including white-tailed deer, armadillos and the world's largest species of turtles.

Huatulco is the only resort area in Mexico with international Green Globe certification for sustainable tourism. There are no factories or industry and the mountains and lush jungle are filled with orchards and wildlife.

It is also renowned for its coral reefs and whale watching as well as the dolphin pods that live around the coast.

The local Zapoteca people still follow their ancient traditions and use local plants and mushrooms for their medicinal and healing properties. 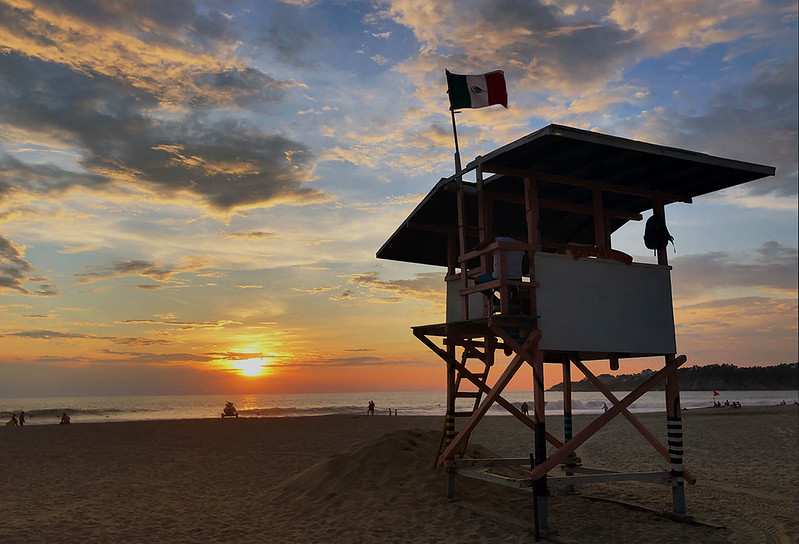 To the north of Huatulco is the laid back surf town of Puerto Escondido with its lively surf and digital nomad culture.

Just outside of Puerto Escondido, you will find Laguna de Manialtepec, which is populated with millions of known dinoflagellate microorganisms which give off the natural phenomenon of Bioluminescence at night.

The lights or "brightness" in the water is the result of a chemical reaction between substances present in them which when combined, flash. When produced, a type of light is generated, which is called bioluminescence. They sparkle when the water is agitated by a boat, with the oars, with your hands, when it simply rains or when swimming.

The most legendary wave in Latin America is along Playa Zicatela in  Puerto Escondido. Often referred to as the Mexican Pipeline, this is a legendary wave reserved for highly experienced surfers that draws an international surfing crowd.

It's best to just watch the professional surfings at Zicatela Beach. For more gentle waves, there is Playa Carrizalillo. 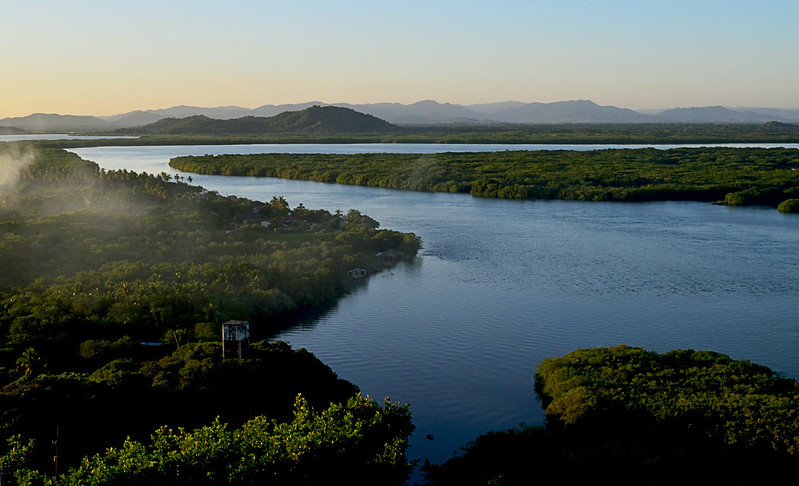 Bathed in cool sea breezes and tropical sunshine, Lagunas de Chacahua has five massive lagoons with huge turtles, crocodiles and some of the best bird watching in Mexico along the Pacific migratory flyway.

So far 246 species of flowers and 189 species of animals have been documented in the national park.

Three species of turtles also visit the park to lay their eggs, including the largest turtles in the world. 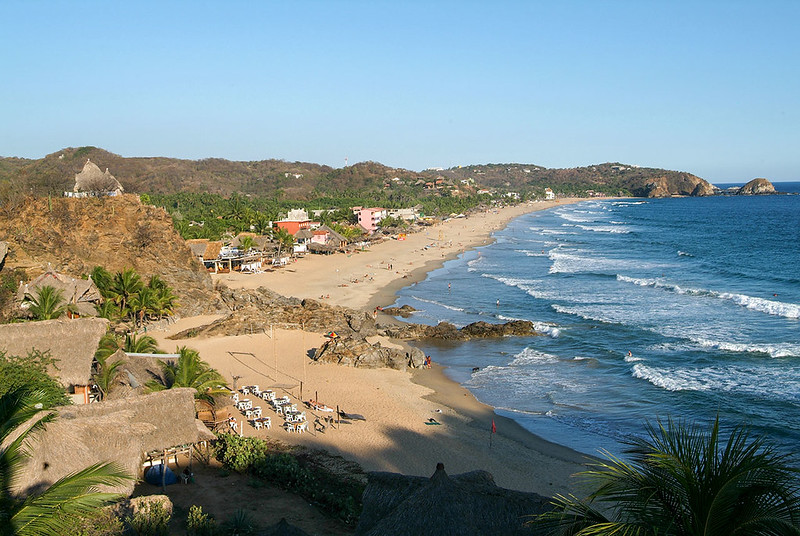 Mazunte is famous for its sea turtles and the main attraction here is the Mexican National Turtle Center and the Cosméticos Naturales de Mazunte.

It is designated by Mexican government as a Pueblos Mágico, a select group of Mexican villages whose cultural, historical, or natural treasures have been deemed, well, magical.

The neighbouring fishing village of Puerto Angel is also very beautiful and the beach resort of Zipolite is breathtaking in its natural beauty and funky resorts El Alchemista.

Other excellent beaches in the area are Playa Mermejita, Playa Aragon and Playa Ventanilla.

This is probably the best spot in Mexico to study esoteric philosophy, yoga and meditation as there are a number of interesting schools in the area. 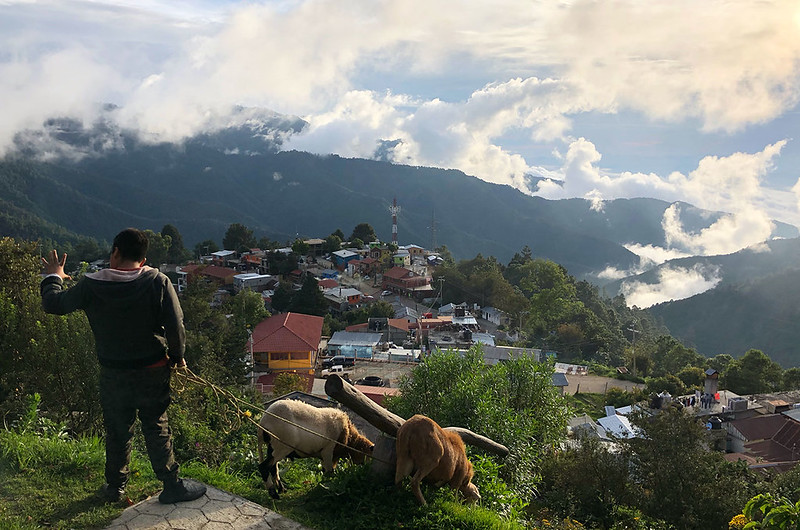 Further up the road is San José del Pacífico, a charming like village clinging to the alpine mountainside at 8,000 feet above sea level that is renowned for its cloud forests and incredible mushroom biodiversity.

This town is famous for Temezcal ceremonies, which involve sweat lodges and a number of cleansing plants to refresh and renew your senses.

The hiking trails around the town offer some of the most beautiful views in Mexico and on a clear day you can see the Pacific Ocean 2500 m below from some of the best viewpoints. 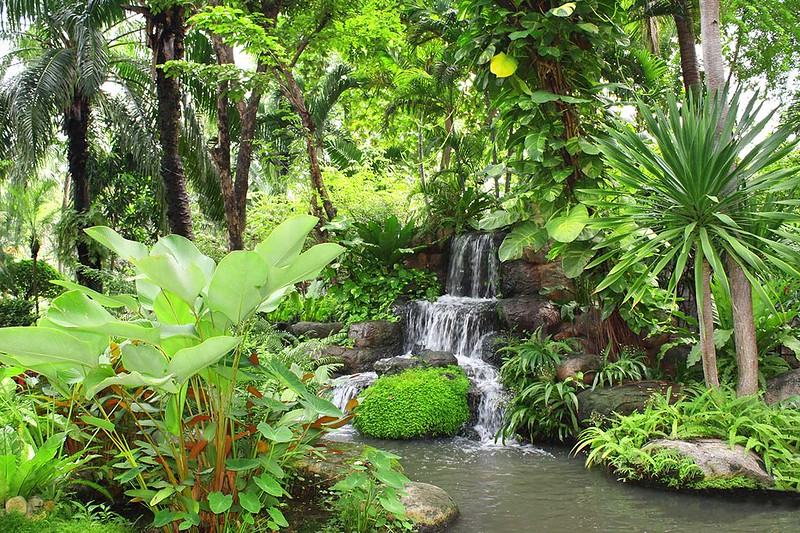 Not, it's not the monument to Byzantium in modern day Istanbul, Turkey. Hagia Sofia comes from the Greek meaning "holy wisdom" and in Oaxaca the Hagia Sofia is a 320-acre agro-ecological project at an altitude of 850 - 1280 feet above sea level.

Throughout the Hagia Sofia gardens, the plants are labeled with scientific, Spanish, and Zapotec names.

During the Hagia Sofia Eco-Garden tours you get to taste exotic fruits from the region, explore your senses of smell on their interpretive trail called the "Path of Flowers" and explore the patterns and symmetry of a wide variety of flora and fauna.

You can refresh yourself after hiking and exploring by swimming in the Madalena River that flows down from the cloud forests above under the cascade of the La Campana waterfall. 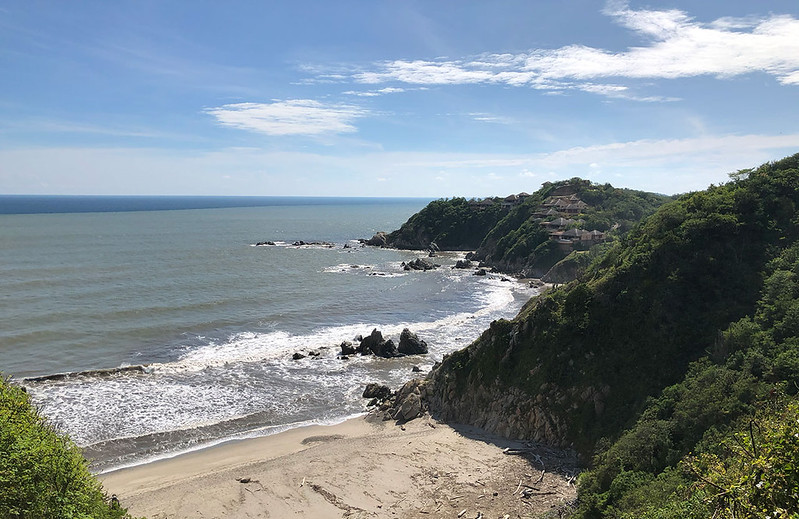 Coplita is an ancient city that was buried in the jungle about 10 minutes south of Huatulco.

This is an excellent place to learn about the local Zapoteca peoples and their very ancient history here on the Oaxacan coast.

There is an excellent hike in the Archaeological zone to a viewpoint of renowned surfing beach La Bocana Beach and the huge Copalita estuary where the river meets the Pacific Ocean. 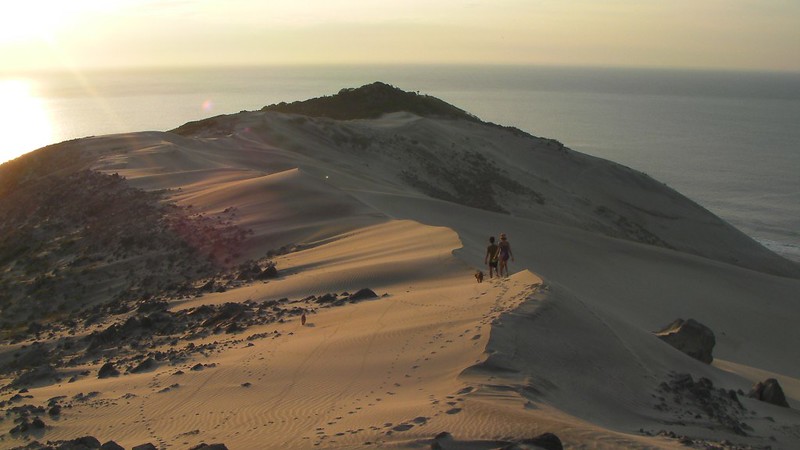 Between the villages of Chipehua and Santa Cruz Bamba you will find some of the largest sand dunes in Central America that stand like a mountain above the Pacific Ocean.

There is also excellent off-the-beaten path surfing spots here like Playa Congrejo and the nearby center of Salina Cruz offers a lot of interesting places to explore including the massive Laguna Superior and a series of oceanside peninsulas on the migratory Pacific flyway for birds.

From here, you can easily access the spectacular national parks and trekking in the mountains of Chiapas and Oaxaca.

Learn about the great opportunities for adventure travel and ecotourism across this beautiful Planet.