Explore The Natural Wonders of The Panamanian Isthmus

With its unique geography as an isthmus land bridge between continents and oceans Panama has more biodiversity per kilometer than the Amazon rainforest. 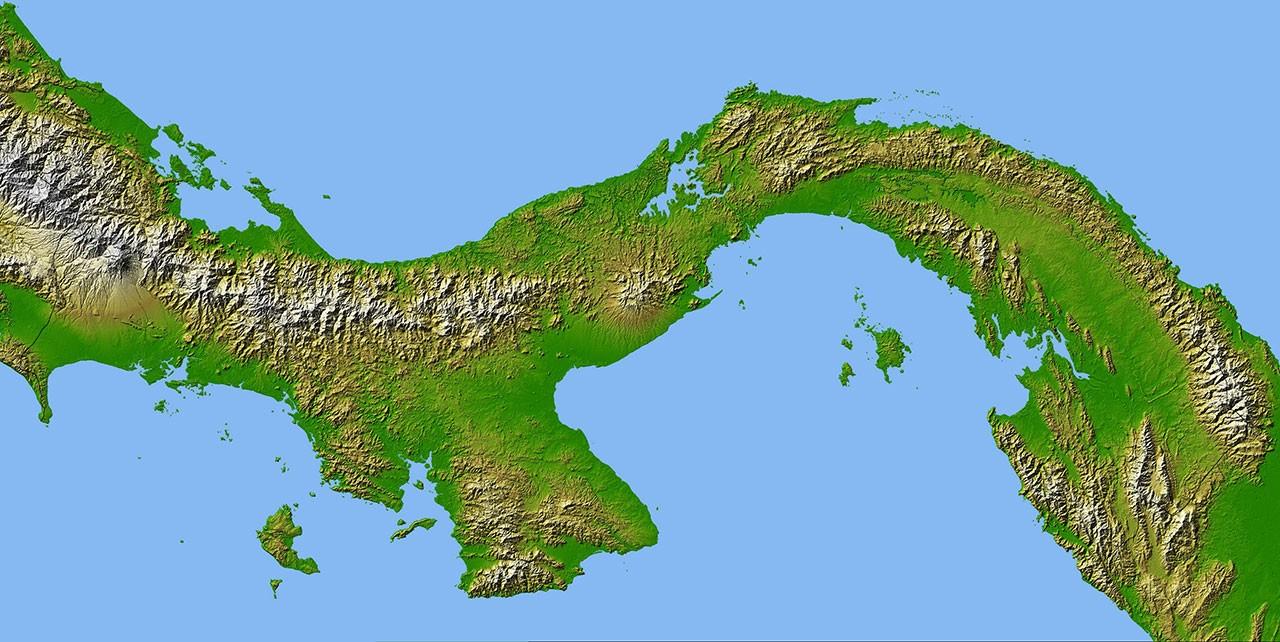 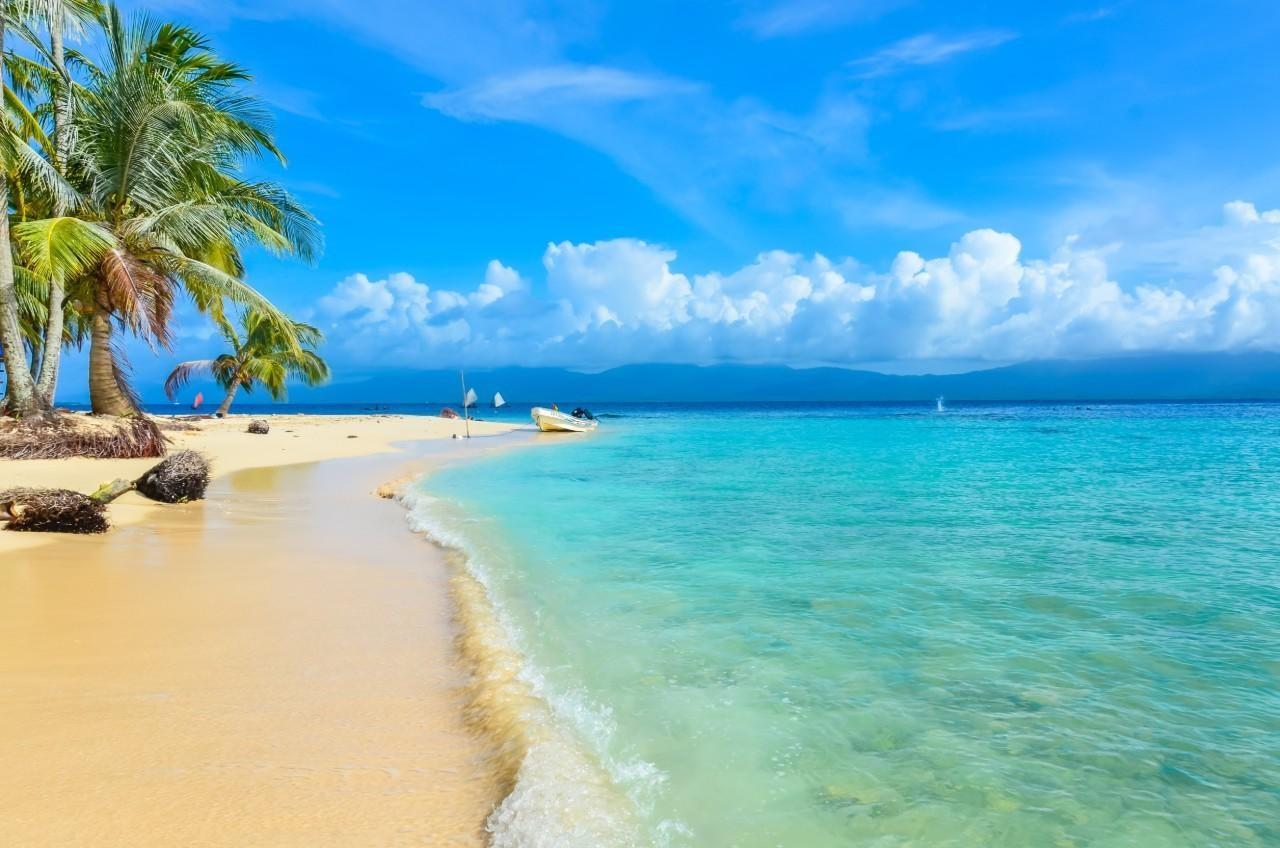 Also known as the San Blas Islands, Guna Yala is an archipelago comprising approximately 365 islands and cays, of which 49 are inhabited. These islands lie off the north coast of the Isthmus of Panama, just east of the Panama Canal, and they are accessible by a short flight from Panama City's airport.

The San Blas Islands are administered by the Guna people, an indigenous group on the Caribbean coast of Panama in the province of Guna Yala.

San Blas and its surrounding area is a haven for ecotourism because of its pristine natural environment. The area is also popular for sailing, as it is known for its beauty, mountains, white sand beaches and a lack of hurricanes.

Notable locations in the Archipelago are the main capital, El Porvenir, the densely crowded island village of Carti Sugtupu, and the two keys, Cayos Limones and Cayos Holandeses, both of which are renowned for their clear waters.

The islands could be rendered uninhabitable by sea level rise in the late 21st century if climate change is not stopped. 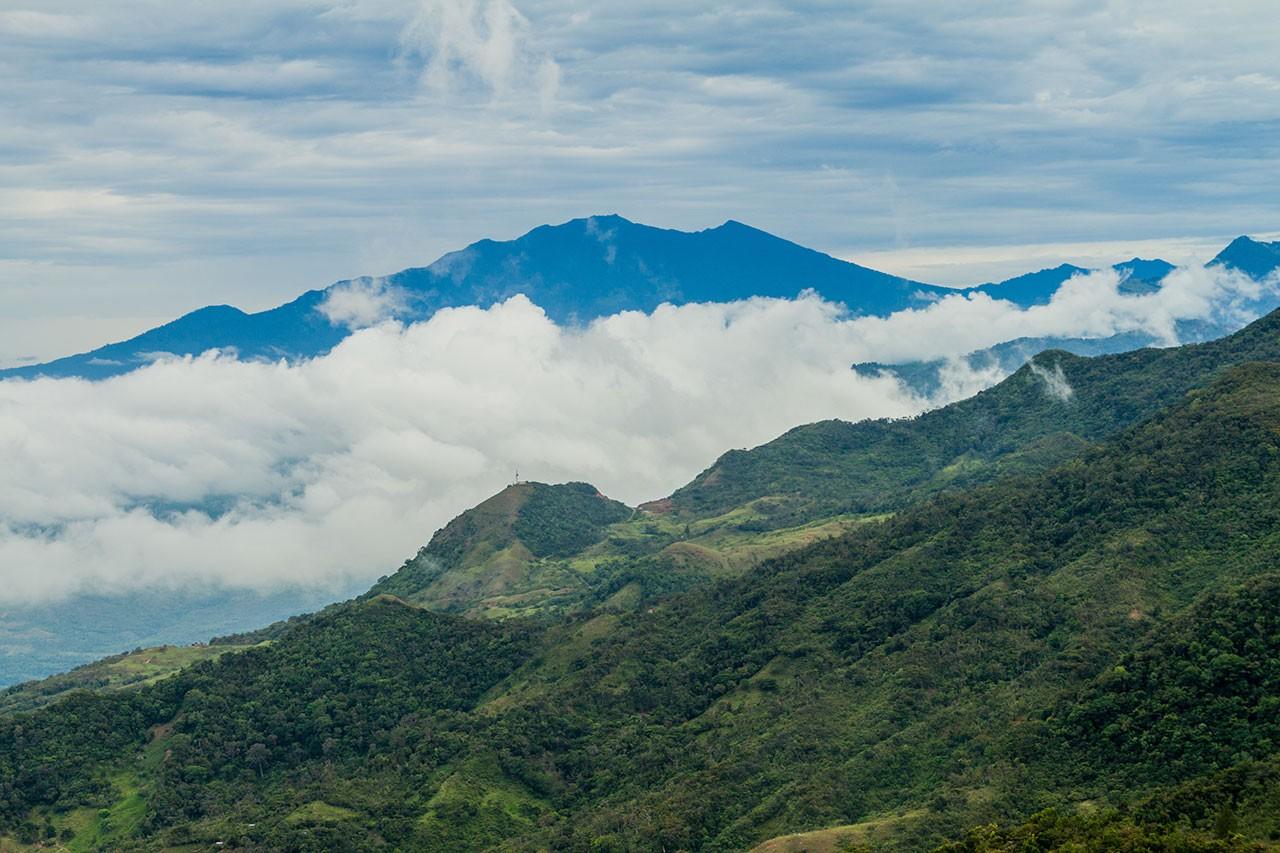 Volcan Baru National Park is located in Chiriqui province in the far north of Panama along the border with Costa Rica. It is named after Volcán Barú, the highest mountain in the country and an active stratovolcano towering above the Pacific Ocean and Caribbean Sea at 3,475 metres (11,401 ft) high.

From the top, you will have an amazing view of both Pacific and Caribbean coastlines. This is the only place on Earth where you can do that!The ascent takes approximately 6-8 hours, making the hike a challenging experience for both avid and inexperienced hikers. Camping is also available near the summit.

The place to base yourself to explore the national park is a mountain expat haven called Boquete.This idyllic towns sits just outside the boundaries of the smoke-spluttering Volcan Baru National Park.

To the north and west are some of the largest tropical forest reserves in the world, including Fortuna Forest Reserve, Bosque Protector de Palo Seco and La Amistad International Park.

To the south are the world famous coral reefs and whale watching destinations of Gulf of Chiriquí National Marine Park and Isla Parida. 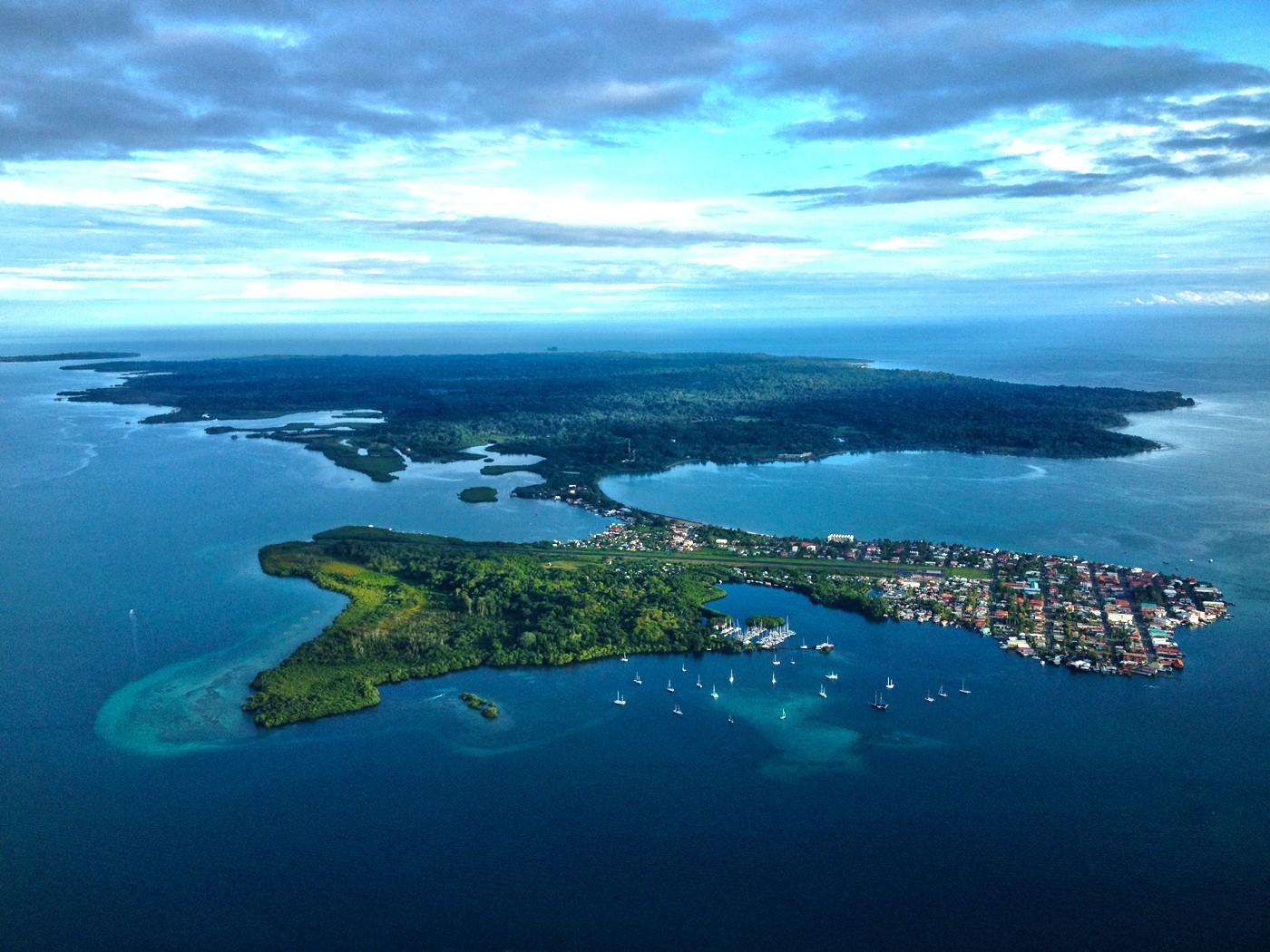 In the Bocas Del Toro archipelago you will find Bastimentos National Park, the country's first national marine park created in 1988. It is home to a variety of plant and animal species.

There are excellent waves off Colon and Bastimentos Islands for surfers. Snorkelers and scuba divers flock to the coral reefs in Admiral Bay and Bastimentos National Marine Park where the mangrove islets feature crystalline waters and an otherworldly underwater forest.

The local indigenous tribe in Bocas Del Toro is known as the Ngöbe-Buglé, and they offer eco tours on San Cristobal and Bastimentos Islands. 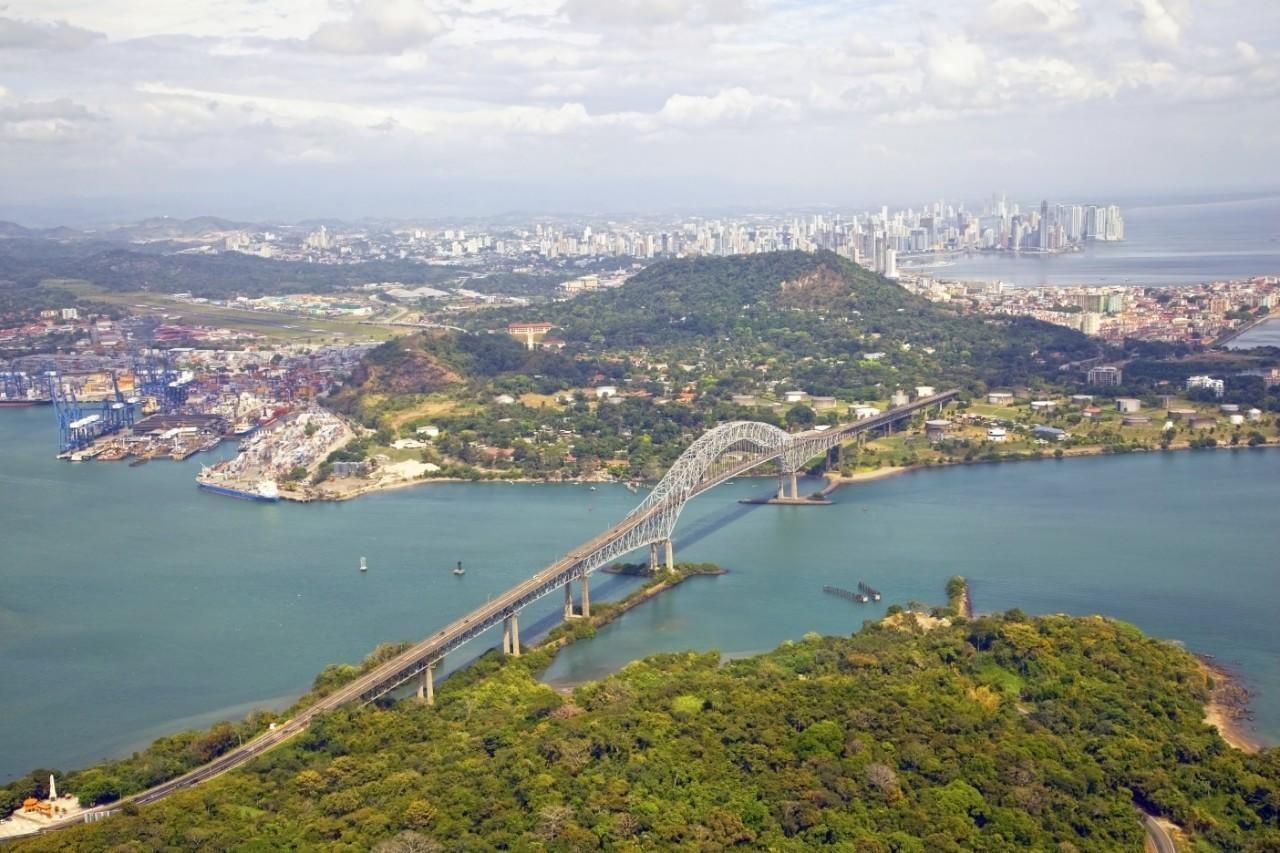 Few cities in the world can rival Panama City's close proximity to nature. It is ultra-modern and considered the safest and most highly developed city in Latin America.

A few minutes from the downtown area you will find the Parque Natural Metropolitano, which is home to 284 kinds of trees, over 250 species of birds, 45 species of mammals and 50 species of reptiles and amphibians.

A must-see trail for birdwatching is called the Pipeline Road, upon which the Audubon Society organized a world record census in 1996 that recorded 525 species of birds in just one day.

Near Panama City, you can do whale watching and adventure tours to a number of tropical island paradises not far from the both the Caribbean and Pacific coasts.

Taboga Island, which is known as the "Island of Flowers," is another popular  destination near Panama City. It offers spectacular views of the city’s coastline and surrounding mountains from across the bay. 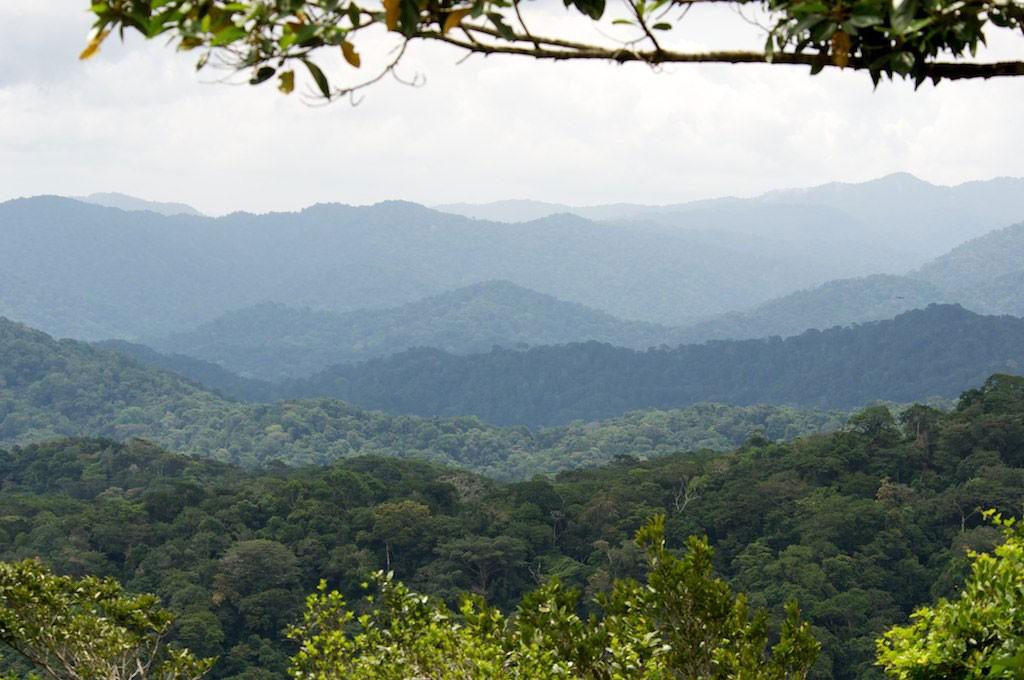 Chagres National Park is one of the most well-preserved national parks in Panama due to its importance in protecting the water sources of the Panama Canal and Panama City.

Spanning across 500 square miles and both the provinces of Panama and Colón, this breathtaking park is full of scenic waterfalls, untamed rivers cutting deep into the jungle, and steep mountains.

You can arrange for 2-day eco tours for white water rafting on the Chagres River and an overnight stay in an indigenous Embera village inside the national park.

The best place to access Chagres National Park is from the Cerro Azul Ranger Station, which is about 45 minutes from Panama City. From this area, you can access the excellent hiking and birdwatching on upper slopes of the two highest mountains in the central mountain range 950 m (3116 foot) Cerro Azul and 1007 m (3304 foot) Cerro Jefe.

This alpine mountain area is actually one of the oldest cloud forests in the Western Hemisphere and it can be a refreshing break from the tropical heat with temperatures up to ten degree celsius cooler than Panama City.

Also worth visiting on the edge of Chagres National Park is the off-the-grid sustainable village project Kalu Yala and a center for biocultural leadership found in the Mamoní Valley Preserve.

Then there is El Camino Real that goes through the heart of Chagres National Park, a 4-day jungle trek on a 16th century cobblestone route built by the Spanish conquistadors for transporting plundered Incan gold across the most narrow point on the Panamanian isthmus. 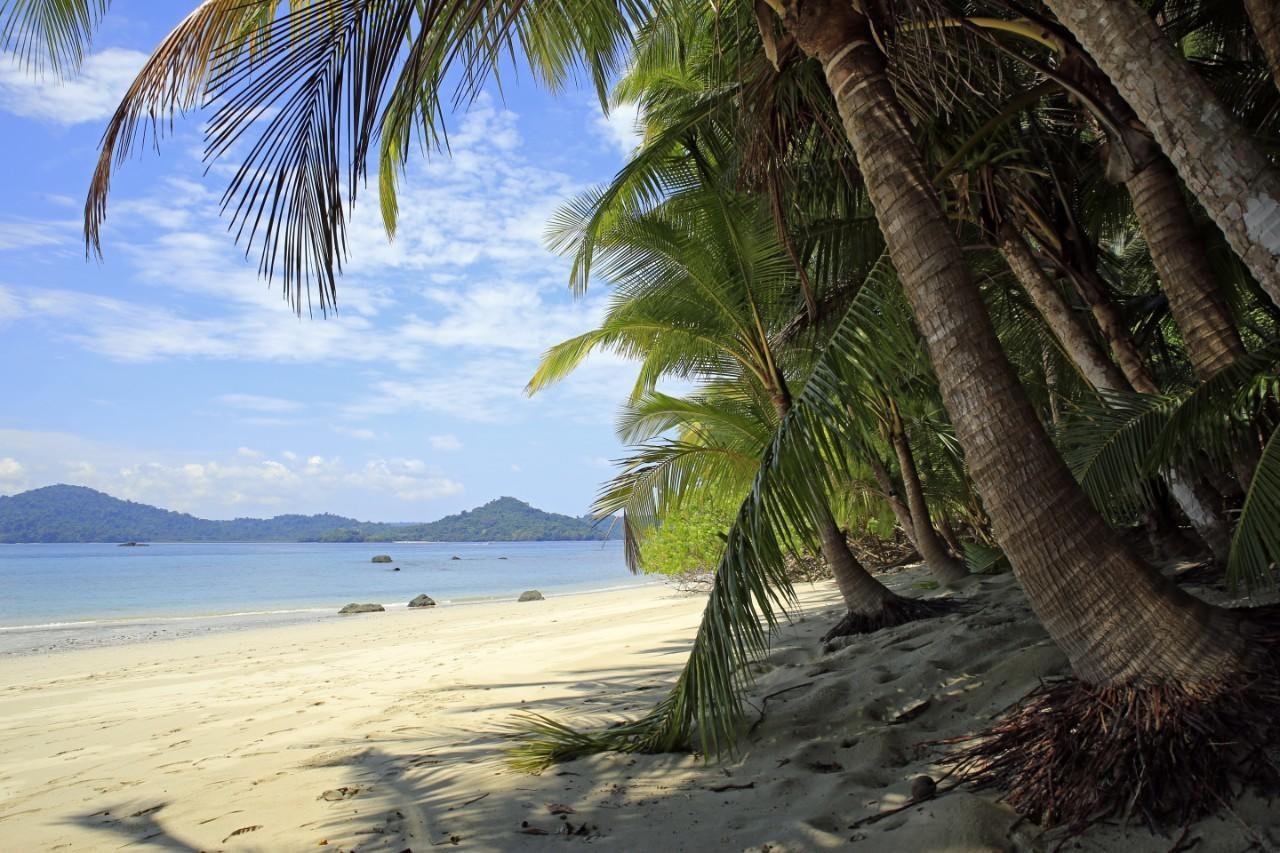 Referred to as the "new Galapagos Islands,” Coiba is the largest island in Central America, with an area of 503 km2 (194 sq mi) just off the Pacific coast.

The island served as a penal colony until recently, so access to the island was very restricted until 2004. Almost by accident, 80% of Coiba’s natural resources have therefore survived untouched and flourished through limited human contact.

With its designations as a national park reserve and UNESCO World Heritage Site, Coiba National Park has the potential to be a world-leading ecotourism spot.

Managed by the National Authority for the Environment (Autoridad Nacional del Ambiente, ANAM), the park is accessible only by permit from ANAM. A number of tour operators in Panama City offer ecotours, fishing, and scuba diving trips to Coiba and can assist you in obtaining appropriate permits.

Santa Catalina is the closest access point, and it is about just over an hour boat ride from Santa Catalina's beach to Coiba Island. 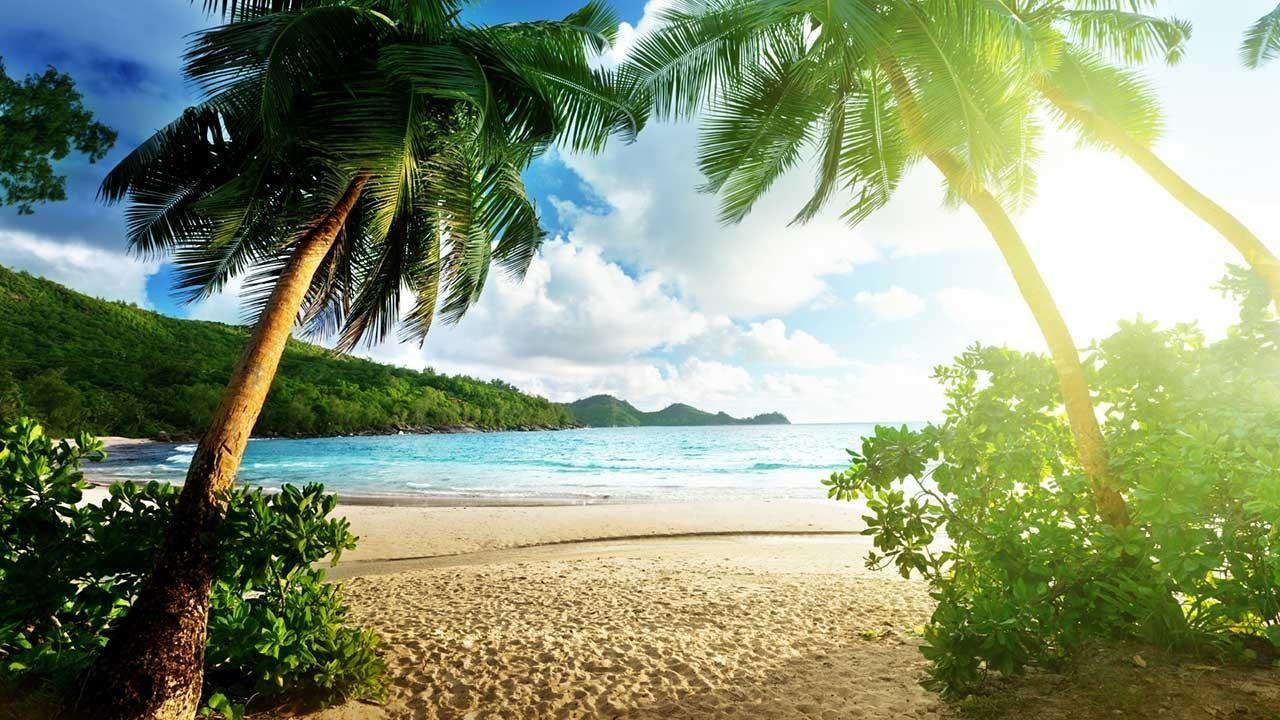 The Pearl Islands, known as the Archipiélago de las Perlas in Spanish, is a group of more than 200 islands and islets lying about 30 miles (48 km) off the Pacific coast of Panama in the Gulf of Panama.

These beautiful islands are famous for their turquoise waters and mostly deserted white sand beaches. They have also become a world-class destination for both scuba diving and whale watching.

It is much easier to visit this island archipelago than Bocas Del Toro or Guna Yala because there are convenient ferries available from the Amador Causeway in Panama City.

Pre-Columbian artifacts have been found on Contadora Island and other islands in the group. The biggest island is Isla del Rey, where more than fifteen pre-Columbian recognised archeological sites of the Cuevas and Cocle cultures have been identified.

The Islands were frequently used by pirates and were relatively undisturbed until the 1960s and 1970s when the building of the resorts began on Contadora Island, which is where the Shah of Iran famously took refuge in 1979. 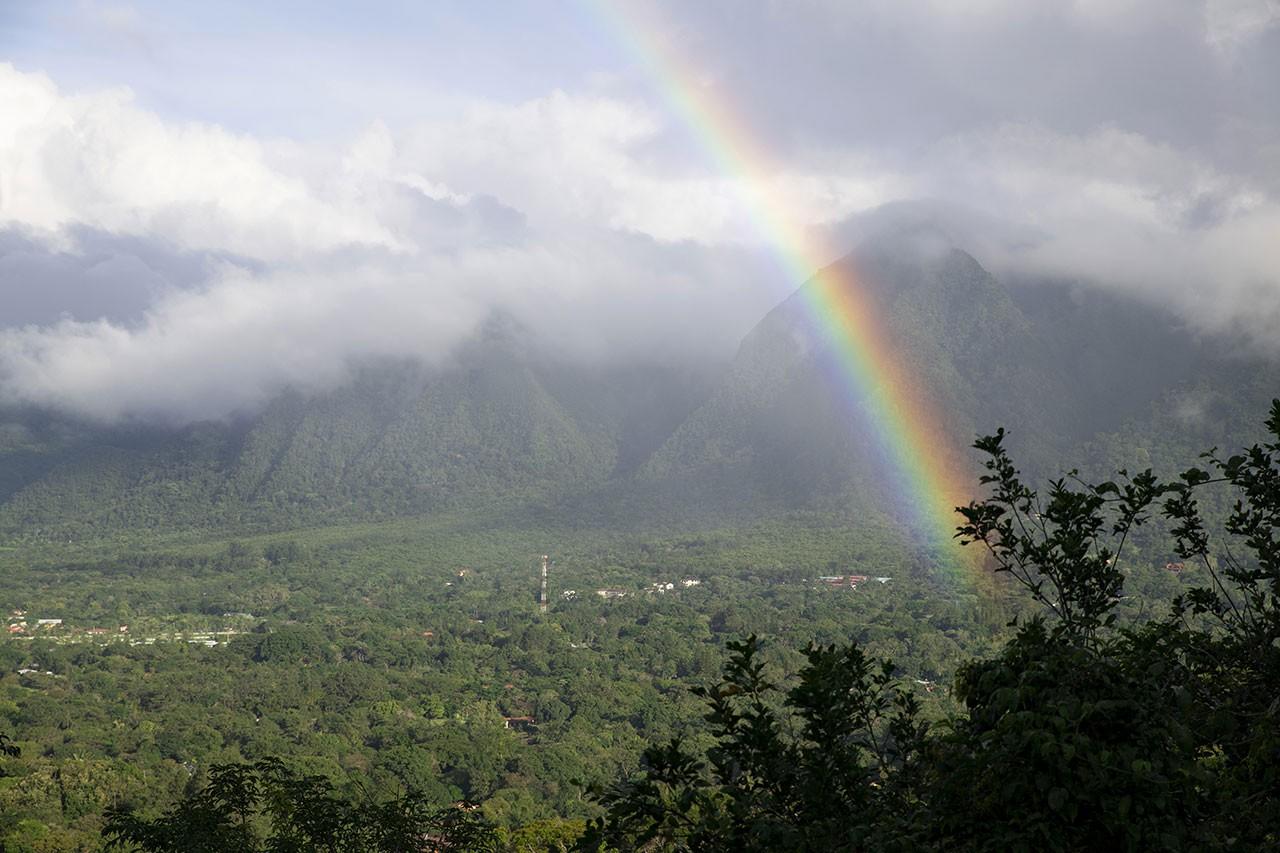 A 2-hour drive from Panama City, you will find the mountain village of El Valle de Anton nestled inside the world's only inhabited volcano.

Known for its cool breezes, rich volcanic soil and year round spring-like climate, what locals call El Valle lies inside a volcano that has been dormant for 5 million year.

There are a number of excellent hikes in the area. La India Dormida is a popular sunrise viewpoint about 45 minutes from the town, the beautiful viewpoint Cerro Pichaco is a short drive away and Cerro Gaital at the end of the valley is a challenging hikes with some of the best views in Panama.

For cliff jumping and swimming, there are many waterfalls hikes to choose from. The most popular is the Pozo Azul Waterfall Canyon and for cooling off you can enjoy rafting, swimming and cliff jumping at Los Canjones de Chame about 30 minutes away.

El Valle de Anton is less than an hour from the beach resort area of  Coronado where you will find excellent beaches, world class surfing breaks and the best place for kitesurfing in Panama on the thin Punta Chame peninsula. 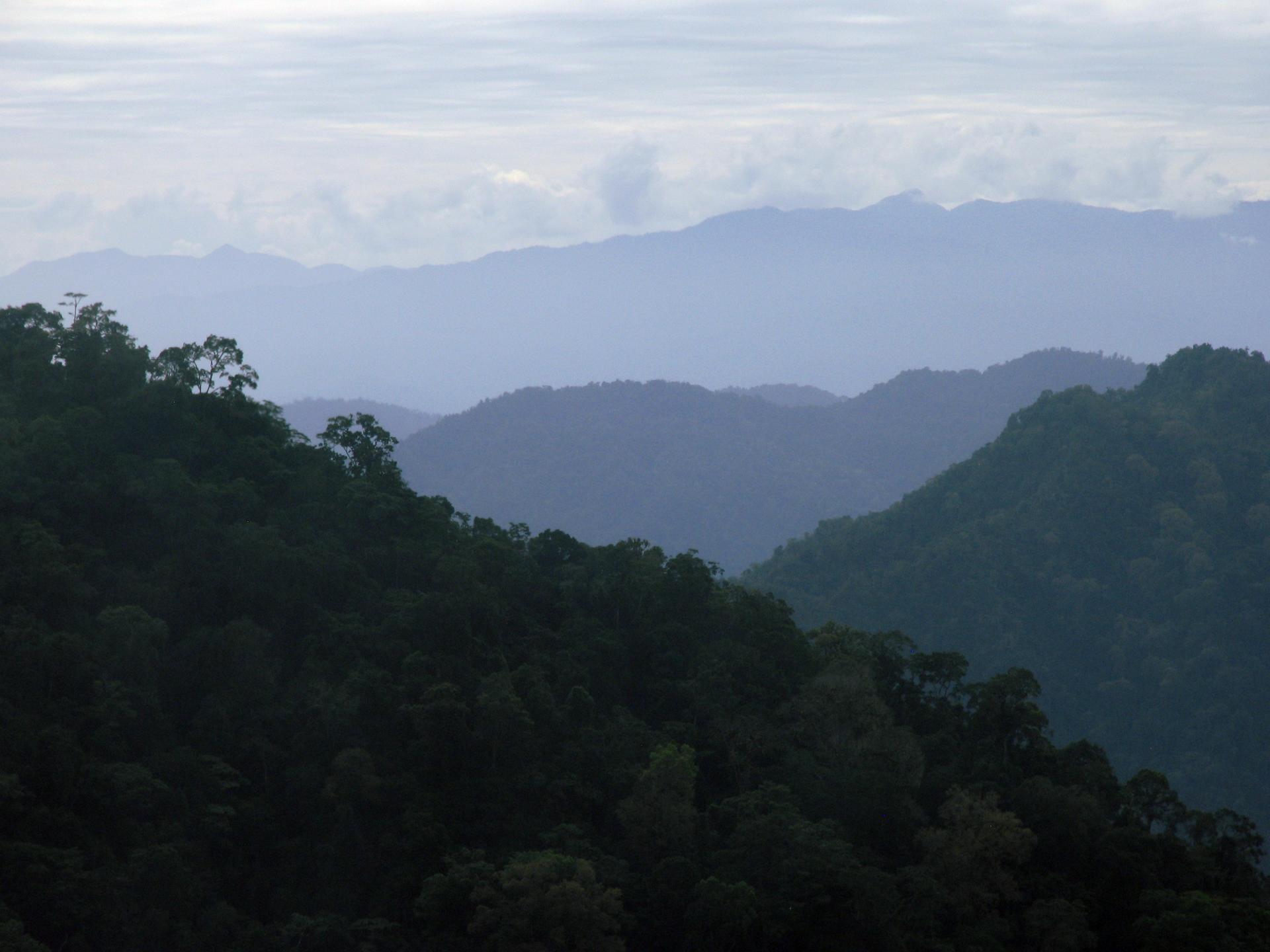 La Amistad International Park is a breathtaking rainforest spanning 3,540 square miles (5,700 km) across the Talamanca Mountain Range, with territory in both Panama and Costa Rica.

This area of extraordinary biodiversity was designated a UNESCO World Heritage Site in 1982 and is by far the wildest and most remote region in both countries. While it remains largely undeveloped, it has huge potential to be developed for sustainable ecotourism run by local guides of the 3 indigenous tribes that live in this area – the Naso, Bribri, and Ngöbe-Buglé.

There are over 10,00 species of flowering plants here and five species of big cats roam the park: pumas, ocelots, margay, jaguars, and jaguarundis. 600 species of birds have been documented here, including the three-wattled bellbird, resplendent quetzal, yellow-green finch, and bare-necked umbrellabird.

There are two main access points for exploring La Amistad International Park on the Panamanian side. For mountain trekking in the cloud forests, the best access is on the Pacific slope is from the Las Nubes park entrance just outside Cerro Punto, the highest town in Panama at 2,000 m (6,500 feet).

The Las Nubes park entrance is the most popular access point and here you will find the best trails: El Retono and La Cascada. It is highly recommend to hire a local guide because they will enrich your experience by helping you understand the incredible biodiversity of plants, trees, birds and wildlife in these breathtaking cloud forests.

On the Caribbean slope, you can access the Weckso park entrance near the small city of Changuinola, which is less than an hour from Bocas Del Toro.  This is the best area to experience the local indigenous culture and their traditional way of life by staying in one of the villages of the Naso, Ngöbe and Bribri indigenous people. 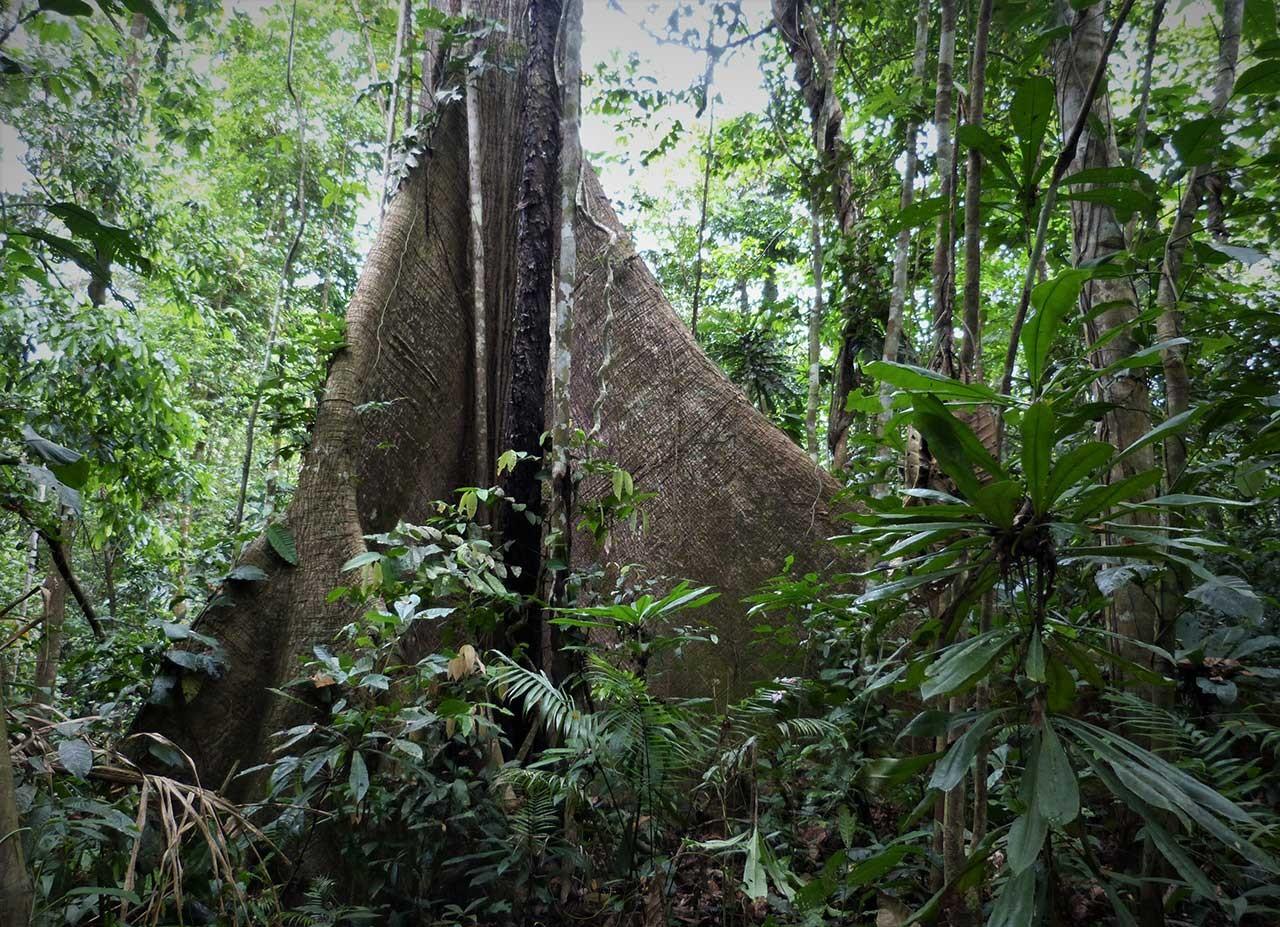 If you really want to get off the beaten track, Darien has become synonymous with some of the most primeval hinterlands left on Earth.

Darien National Park is a UNESCO World Heritage Site and a biosphere reserve that covers the rugged mountains and impenetrable rainforests of the so-called Darien Gap; bridging the way between Central and South America.

There are virtually no roads in this nature reserve, and it can only be explored by serious trekking or by river boat. To explore Darien National Park, you will need to hire a local guide.

There are 3 indigenous groups with villages in the Darien jungle, the Guna, Embera and Wounan. You can hire local an indigenous tour guides and there are some local tour companies that sometimes offer 1-2 week long expeditions through the Darien Gap to the Colombian side.

The Cana Valley in the Darien National Park is considered to be the top birding site in Central America, and it is home to many macaws and parrots.

You will also find rare monkeys, jaguars and ocelots in large numbers in the national park.

Kyle Pearce is an avid naturalist and learning experience designer who leads educational retreats and group storytelling adventures around the world through Social Creators.

Our mission at Animist Ecology is to rewild education through adventure-driven ecological learning designed to help people develop all of their senses through Eco-Mindfulness Training.

Browse our ecology guides to learn more about the flora and fauna, national parks and unique biodiversity of Panama.