The 15 Best Hiking Adventures In Banff And The Canadian Rockies

When I was 23, my friend Lisa and I embarked on a 2-month roadtrip down the west coast of North America from Vancouver to Baja California and then back up through the Rockies where I spent a year living in the mountain town of Banff.

I can still vividly remember stepping out of the car and even after all the amazing natural beauty that I'd seen on the roadtrip, being absolutely awestruck by sheer majesty of the incredible mountains on all sides of the town of Banff.

While I originally planned to just stay for the ski season, I completely fell in love with Banff and I couldn't bring myself to leave.

That summer, I convinced a bunch of old friends to move out and we spent the warm summer days exploring the epic backcountry in the national parks.

If you're planning to visit the Canadian Rockies, I recommend at least two weeks to properly see all the 6 national parks:

There are cozy tea houses nestled deep in the mountains, alpine cabins overlooking high up in mountains and a trail system that goes for thousands of kilometres.

The scenery is spectacular everywhere you go and the massive glaciers, lakes, waterfalls and mountain peaks are the stuff of many Canadian legends.

Here are the best spots we discovered for unplugging and tuning into the awe and wonder of nature: 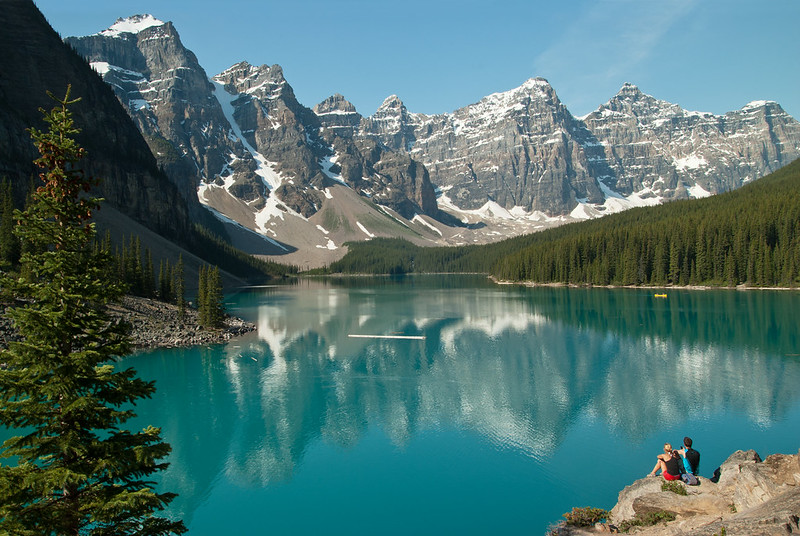 The surreal blue waters of Moraine Lake are created by the refraction of light off the glacial rock flour that is continually deposited in the lake. The Valley of Ten Peaks behind the lake run along the Continental Divide, which marks the border of British Columbia and Alberta.

Moraine Lake graced the back of the Canadian Twenty Dollar Bill until the early 1990s.  Since the lake is at such a high elevation, approximately 1,885 m (6,183 feet), the road is only accessible from June to September.

The rest of the year you have to ski in, which takes about two hours (no snowmobiles are allowed in Canada's National Parks). This is the most beautiful single place that I've ever visited in Canada. 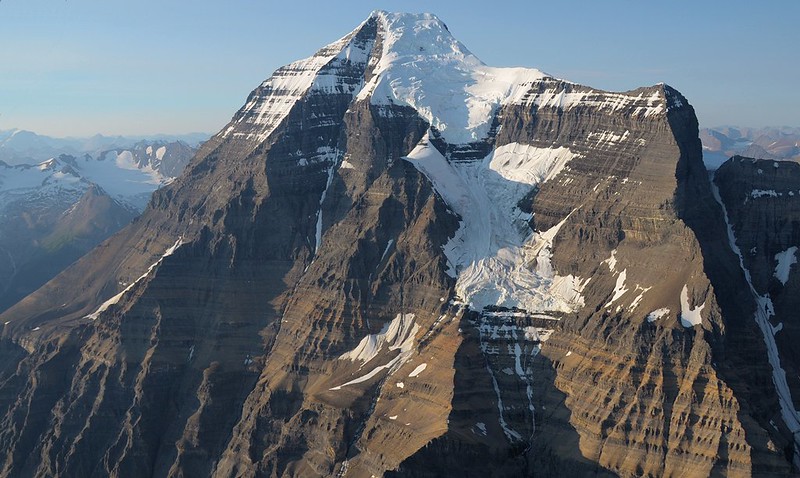 Mount Robson is the highest peak in the Canadian Rockies at 3,954 m (12,972 ft) and what's remarkable about this mountain is the massive 3 km vertical rise from the base to the summit.

The glaciers around Mount Robson are very important to the province of British Columbia because they provide the headwaters of the Fraser River, which flows 1,375 miles (2,213 km) to the city of Vancouver where it reaches the Pacific Ocean.

There is a world famous hike that some consider the best in the Canadian Rockies below Mount Robson along the Berg Lake Trail.

From its place along the Continental Divide, the meltwaters of the glaciers flow into three oceans, the Arctic Ocean to the north, Hudson Bay to the east (Atlantic Ocean) and west to the Pacific Ocean.

There is excellent hiking in the area and you can take an excellent tour on the king-sized Brewster Ice Explorers that are specially designed for glacial adventure travel. The best time to experience the icefields are on the Full Moon Treks, which guided are by the national park rangers. 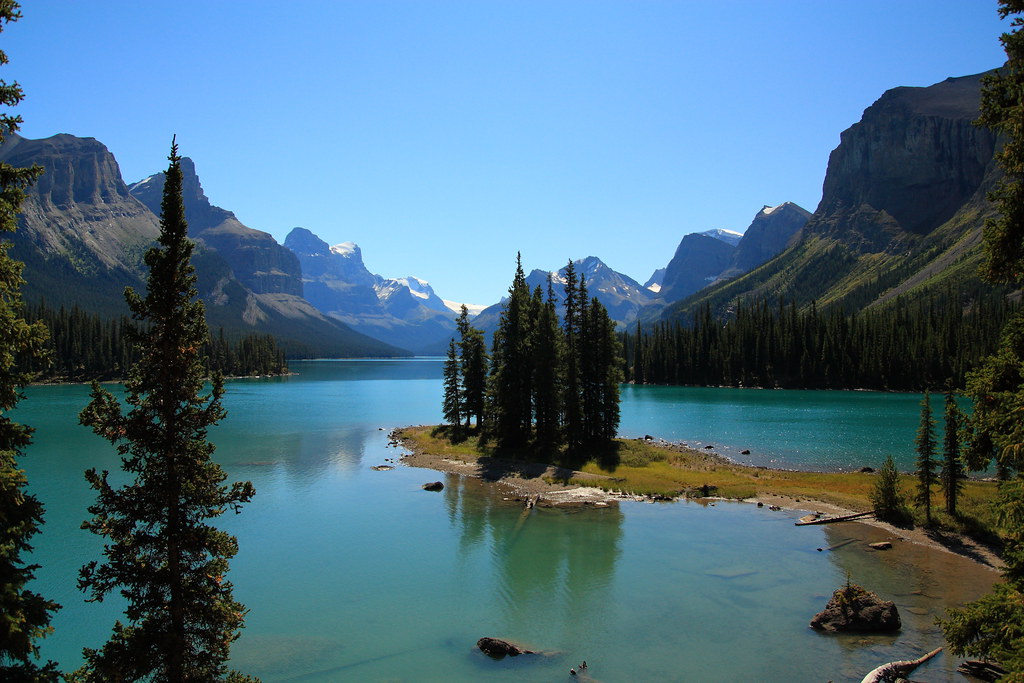 Maligne Lake a place of awe-inspiring beauty in Jasper National Park and one of the most photographed places in the world.

This 22 km long glacier lake is renowned for the colour of its water and the three massive glaciers that surround the lake.

Spirit Island along the southern shore is a great spot to encounter the Great Canadian Moose who often feed along the shores here. 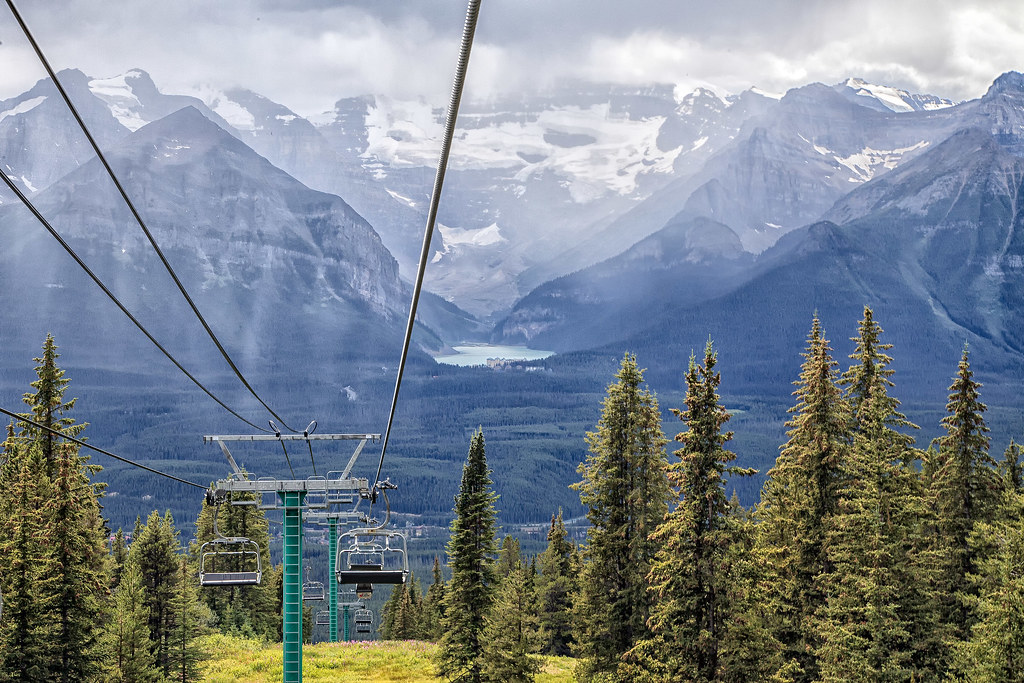 Some of the best views in Banff National Park can be accessed by the year-round gondola at Lake Louise Ski Area.

Lake Louise is often rated the most beautiful ski resort in North America by major ski magazines and its beauty is spellbinding in any season.

In the winter, you can see the mountains along the Continental Divide across the valley and the smoke billowing from the chimney of the miniature-looking Chateau Lake Louise. In the summer, there is great hiking, the opportunity for grizzly bear encounters and beautiful wildflowers dotting the alpine meadows. 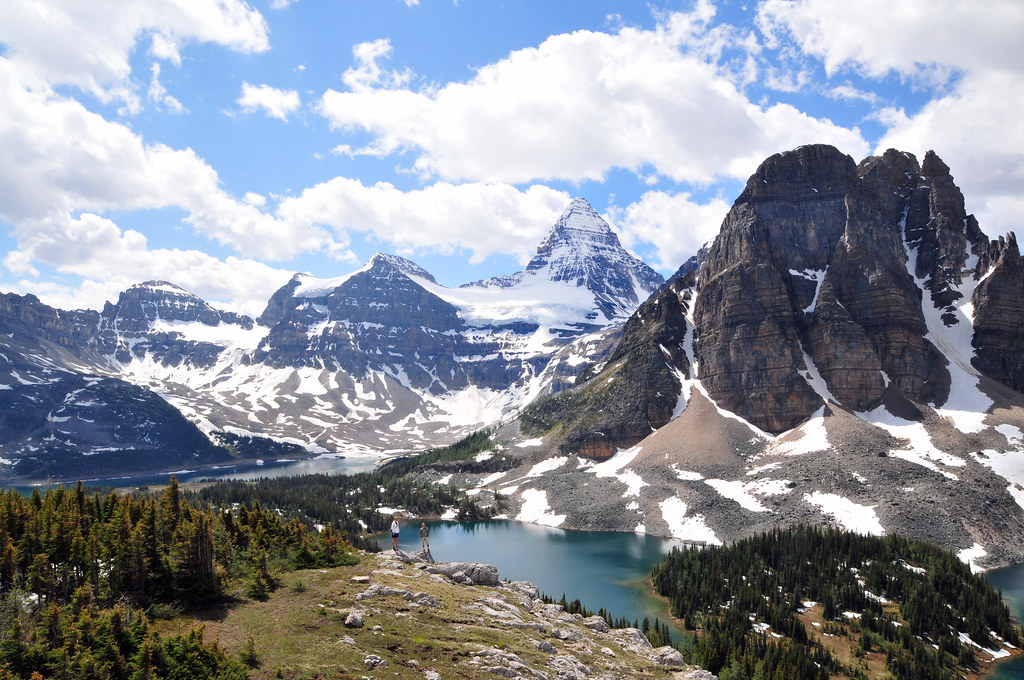 Mount Assiniboine, also referred to as Canada's Matterhorn due to its pyramidal shape, is the highest peak in the Southern Rockies at 3,618 m (11,870 feet).

If you want to visit this iconic Canadian mountain, it is a 27 kilometre trek to Lake Magog at the base of the mountain. There are no roads in the area and it is kept preserved for ecotourism.

Along the meadows below this majestic mountain, you will find a beautiful Assiniboine Lodge (make your reservations well in advance) and some spectacular camping spots. You can get a good view of Mount Assiniboine from the top of Goat's Eye or Continental Divide at Sunshine Village ski resort near Banff. Takakkaw Falls is the largest waterfall in the Canadian Rockies at 384 m (1260 feet), which makes it the second-highest waterfall in Canada after Della Falls on Vancouver Island.

Takakkaw is a loose translation from Cree, meaning "it is magnificent." It is fed by the Daly Glacier in the Waputik Icefield, which encompasses 40 km².

Like most of the waterfalls in the Canadian Rockies, Takakkaw Falls is at its fiercest during the spring melt and the hot summer months.

8. Cascade Mountain and the Banff Townsite 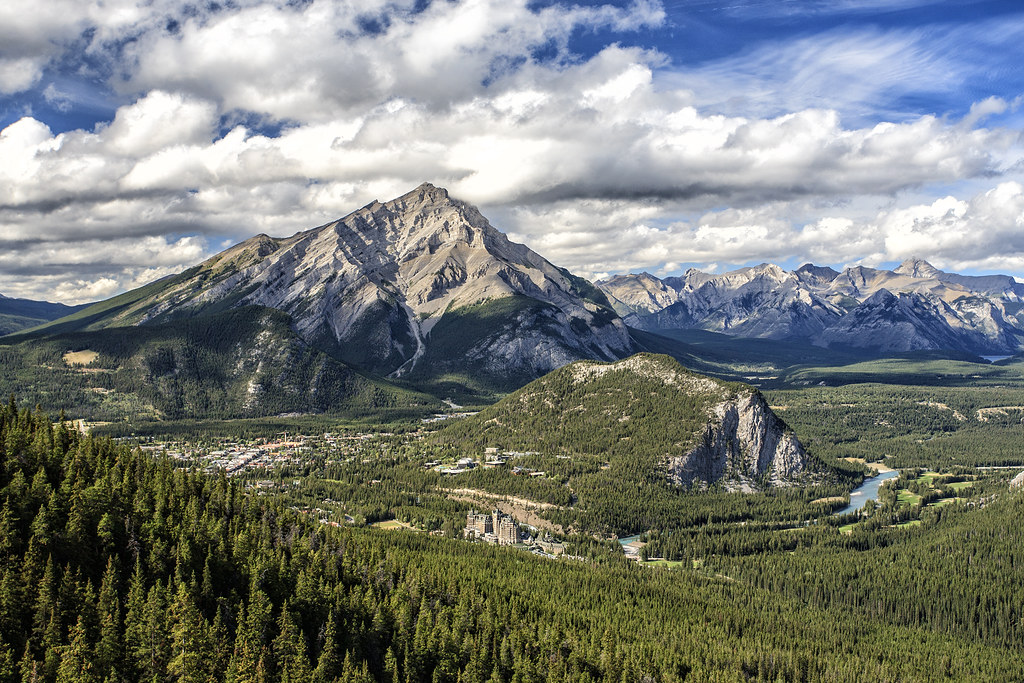 I think Banff is the most beautiful town in Canada. Sitting at an elevation of 1,463 m (4,800 ft), the town has the second highest elevation in Canada after Lake Louise.

Located along the Bow River, it lies at the convergence of five major valleys, which are major wildlife migration corridors. The town's main street Banff Ave. is aligned so that the view of Cascade Mountain right down the middle of the street. Cascade Mountain is 2,998 m (9,836 feet) high and it takes about 10 hours to hike to the summit and back.

The town of Banff is one of the most popular tourist destinations in Canada, attracting close to 5 million visitors a year. Some popular activities in the area include white water rafting, hiking, mountain biking, soaking in the  hot springs and skiing at the local resorts Sunshine Village, Norquay and Lake Louise. 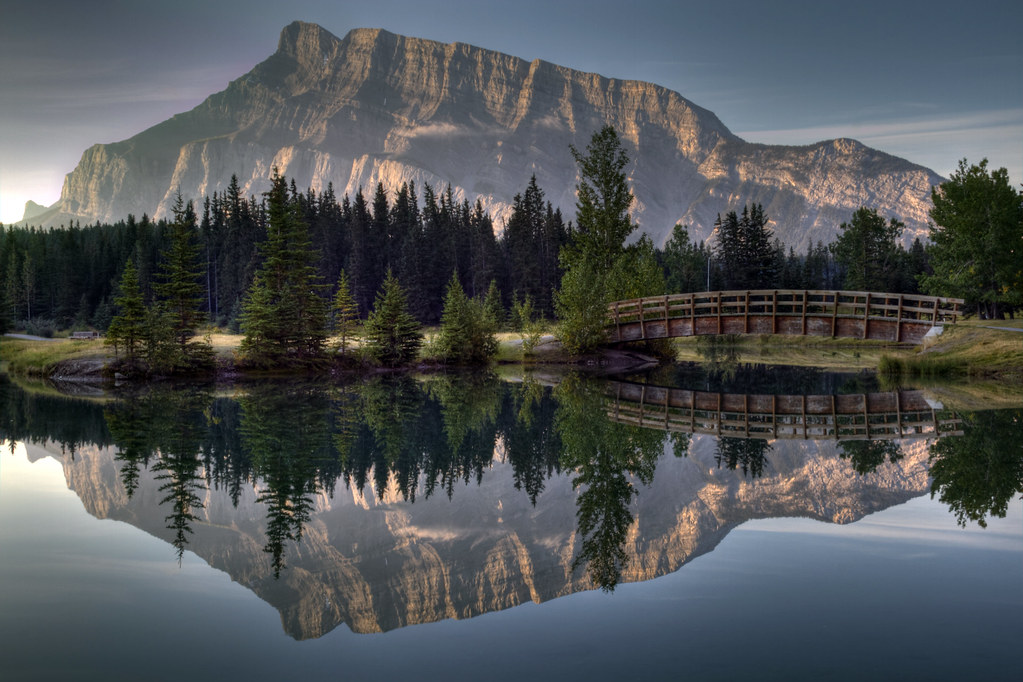 Along with Cascade Mountain to the north, Mount Rundle is other that defines the alpine landscape of Banff.

It is a fun but grueling 9-hour hike to the summit at 2,948 m (9,672 ft). The top part of the mountain (above the tree line on the west side) is called the Dragon's Back and it is a difficult scramble to the edge to peer over the side of the mountain to the river valley below.

Coming down Sulphur Mountain road from the Banff Upper Hot Springs and the Rimrock Hotel where I worked when I live there, you will see a smaller sacred mountain near the Bow River that appears to be pointing to the heavens at a very interesting angle. 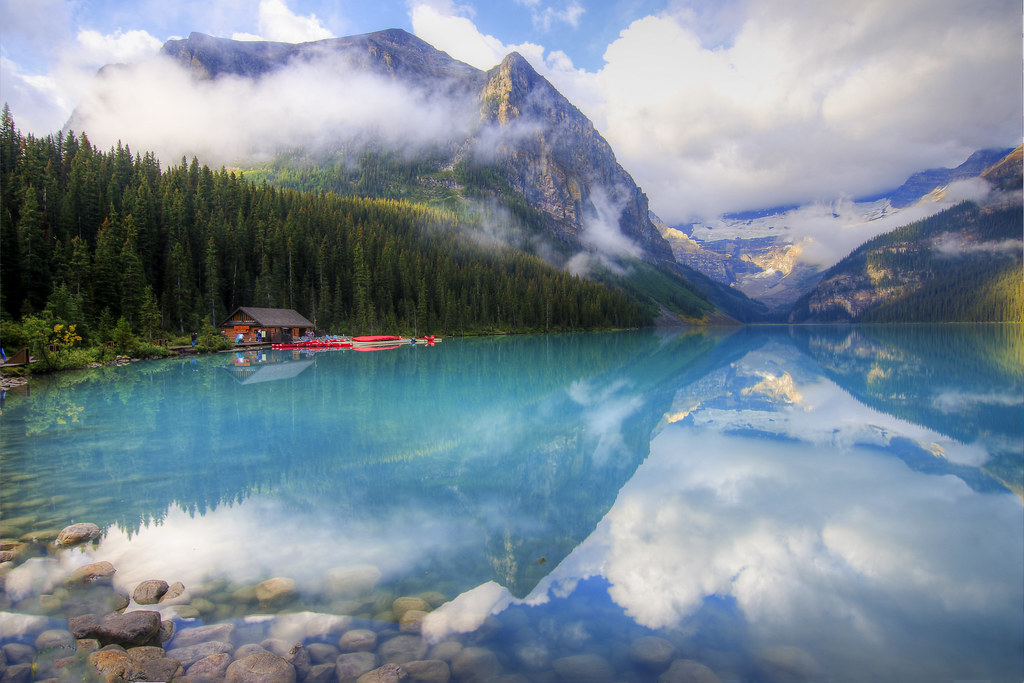 Lake Louise is a popular tourist town at the southern end of the Icefields Parkway. The town is very laid back and the Chateau Lake Louise is a beautiful resort to walk around and explore the history, photography and art that decorates the fabled inner corridors.

Around Lake Louise, the must-do hike in the area is to the Beehives and the mellow atmosphere of the Lake Agnes Tea House in the mountain wilderness.

I also recommend hiking up to the Victoria Glacier pictured behind the lake, the view back to the lake and tiny looking Chateau Lake Louse in the distance is breathtaking. 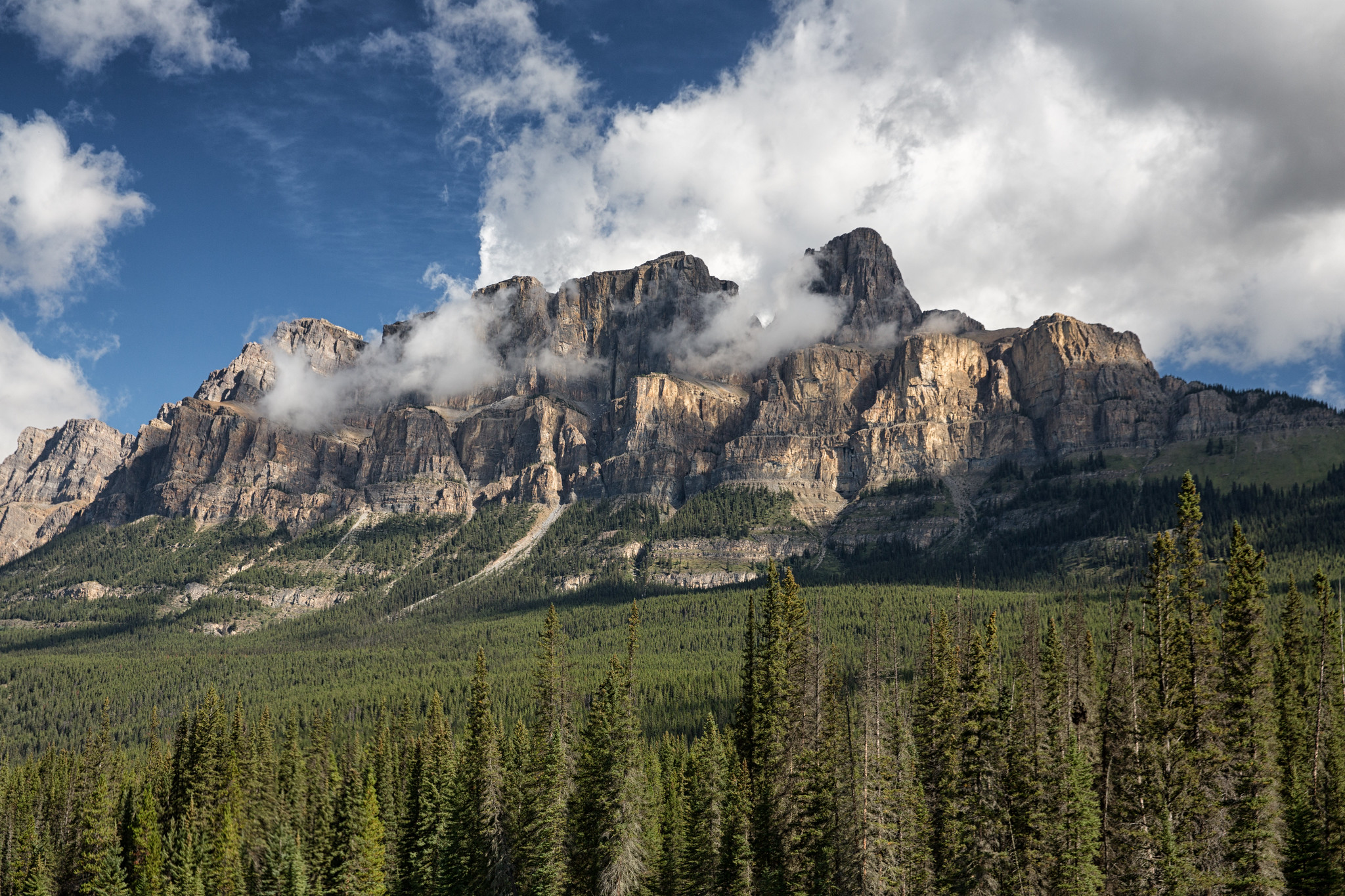 Castle Mountain marks the halfway point between Banff and Lake Louise. Although it looks like a difficult hike from the front, it's actually an easy scrambled up the back side of the mountain to the summit.

The river bend below Castle Mountain is a great starting point for rafting down the Bow River. It is a relatively smooth 3-hour raft in the summer from Castle Mountain back to the town of Banff.

While not for faint of heart because it can be slightly dangerous, it's an adventure you will remember for the rest of your life. 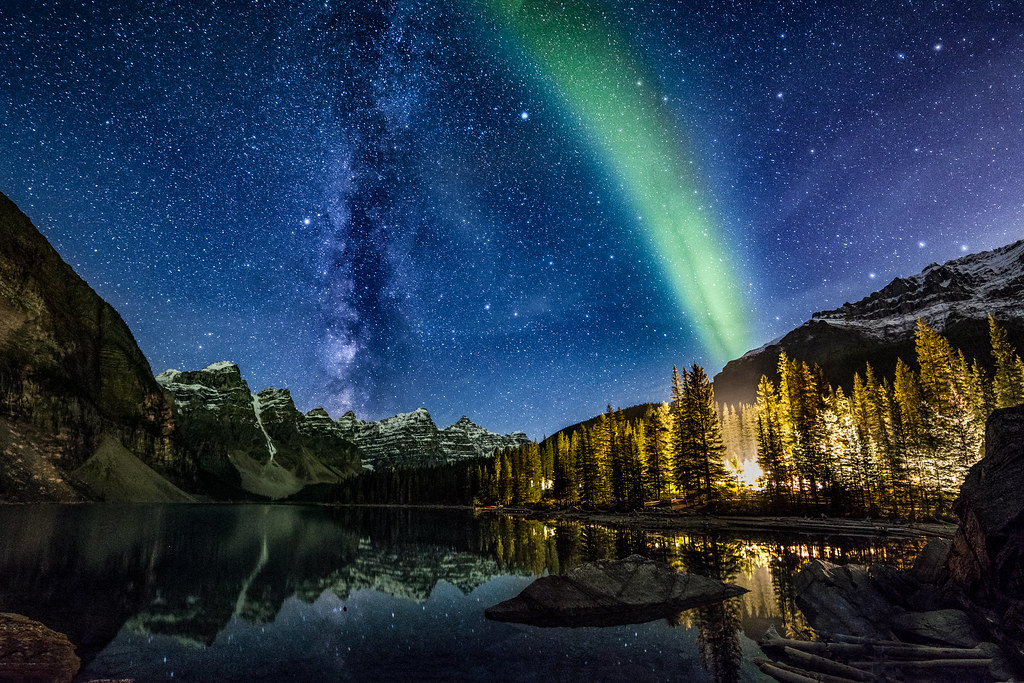 The Northern Lights, or Aurora Borealis, is a natural light display in the sky caused by the collision of charged particles directed by the Earth's magnetic field.

They are named after the Roman goddess of dawn, Aurora, and the Greek name for the north wind, Boreas, by Galileo in 1619.

People come from all over the world to see the Northern Lights in the Canadian Rockies. While they are an elusive mystery, the best time to see them is in August and September while camping in the backcountry. 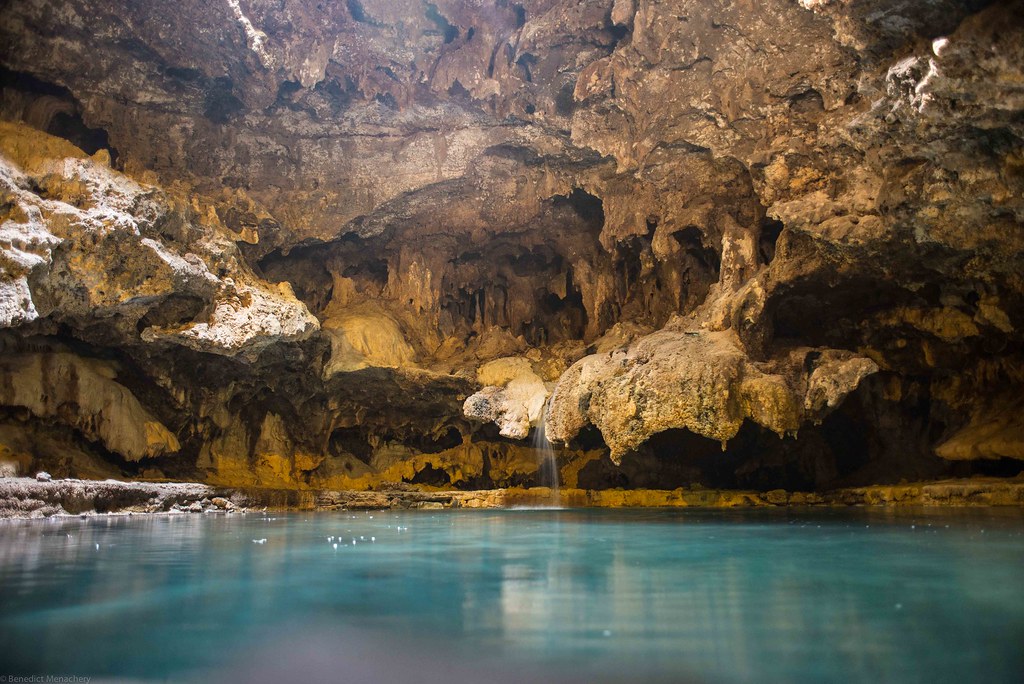 While getting here isn't a difficult hike, you can take the gondola up Sulphur Mountain and hike down the spectacular backside trail to reach the Cave and Basin site.

This is an  historical place because it is where Canada's national park system began. The Cave and Basin natural hot springs were "discovered" in 1883 by two workers building the Canadian Pacific Railway who immediately saw its commercial potential. The fact that it was a sacred site to the local First Nations people didn't seem to bother them and a fence was constructed around the site and a few cabins for tourists.

Conflicting claims on the site prompted the Canadian government to intervene and in 1885, Prime Minister John A. MacDonald declared a reserve of 26 square kilometres around the Cave and Basin, creating the Banff Hot Springs Reserve.

This was the beginning of Canada's National Park system. There are actually nine natural hot springs along Sulphur Mountain in Banff and a number of other excellent hot springs in the park including Banff Upper Hot Springs, Radium Hot Spring and Miette Hot Springs.

People used to swim in the Cave and Basin until an exotic snail known as the Banff Springs snail was discovered and the government closed the swimming pools to protect this endangered species.

The Willow Stream Spa at the Fairmont Banff Springs Hotel is the best place to experience the healing mineral hot springs (it's the #1 rated Spa in Canada) but the best public place is the Upper Hot Springs on Sulphur Mountain.

14. The Wildlife In The Backcountry 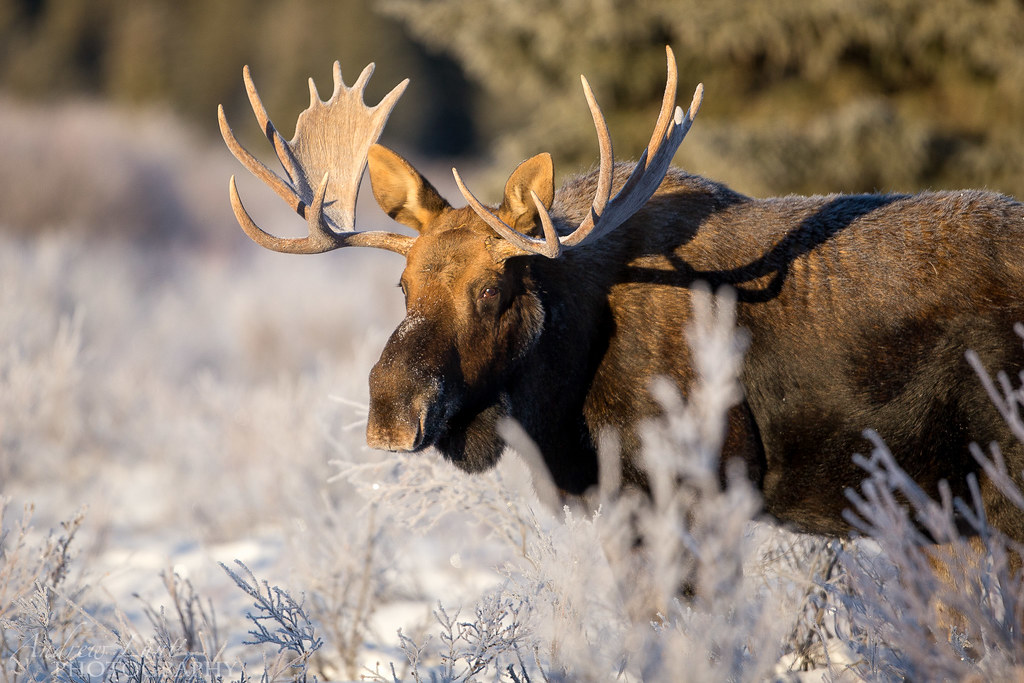 While most tourists rarely get far from a paved road, the backcountry hiking trails offer the best places to see wildlife in Banff and the Canadian Rockies.

This area of Canada is considered one of the best places in the world to see large mammals in their natural environment. Parks Canada, which manages Canada's National Park system has created some interesting wildlife overpasses over some of the roads in the park to facilitate wild animal migration. 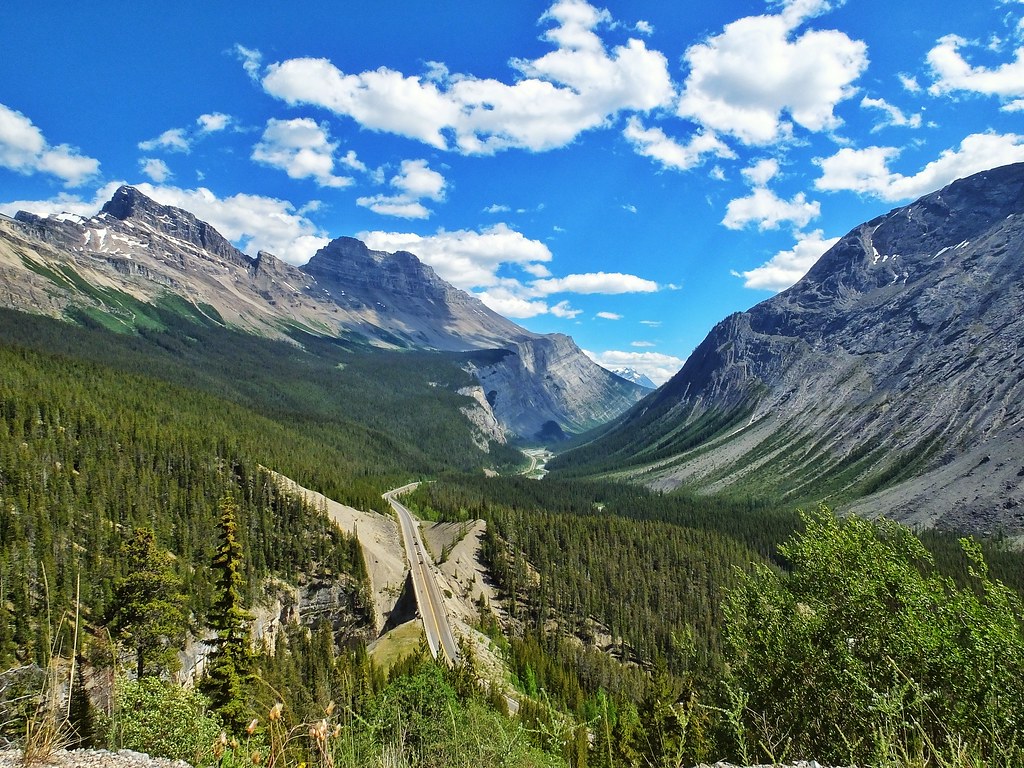 I'd say the 3-hour drive is the most beautiful drive in Canada, although the majesty of the Sea to Sky Highway from Vancouver to Whistler is a close second in terms of scenic beauty.

Along the Icefields Parkway is a number of excellent campgrounds and hiking trails that lead to well-maintained alpine huts up higher in the mountains.